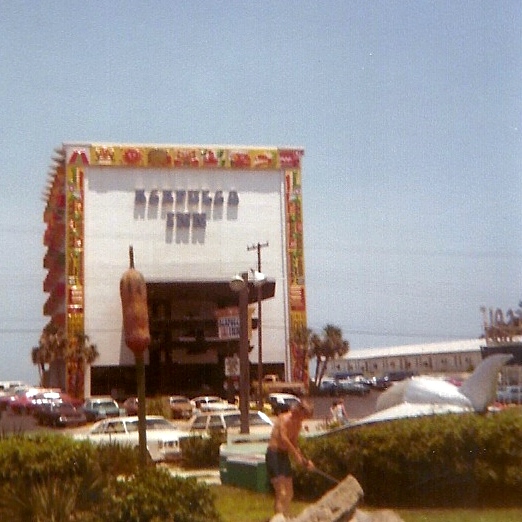 Note: Since I first published this, Dad told me that the Acapulco Inn was actually in Daytona, and that we went there in 1978. I'm not modifying the post below, however, and everything else in it stands. For now, at least. I will add, however, that I did a little investigating, and learned that this hotel was in operation as the Acapulco Inn until 2017, nearly forty years after we stayed there. The building is still in operation as a hotel, but with a different name and an updated facade. -- Chris, May 15, 2022 (just a few days after finishing and posting the musing below)

In my memory it was pretty great, but in reality this hotel was probably pretty mediocre.

I don't really remember it individually anyway. I know that what my memory offers up to me is an amalgam of Florida hotels that we stayed in; any mental images I have of hotel rooms or pools or lobbies are just as likely to belong to other hotels as to this one. The overall wonderfulness of those Florida vacations – my memory of the amalgam of them, anyway – makes me think that anyplace we stayed must have been wonderful. But, even if the vacations were great, the hotels were probably pretty average.

Every summer when I was a kid we would go to Florida for a week of vacation and stay in a hotel like this one. And, in case it's not already obvious, this is a picture of one of the actual hotels we stayed in, the Acapulco Inn in Panama City Beach, probably 1979 or 1980.

And of this I am certain: it really was a wonderful thing to be a little boy in the 1970s, in the summer, on vacation at the beach with his family. Panama City Beach, Florida, was the best – but then I would probably say that about anywhere we had gone then. But there are reasons I have such great memories of Panama City: The Miracle Strip, a no-longer-there amusement park, was across the street, and there were putt-putt golf places and souvenir shops and pancake houses everywhere. (There was also the beach and the ocean, but, strangely, that's not a big part of my memories of our vacations to Florida.)

And memorable things happened when we were there: one year (1983, actually; I can say this for sure because that's when the movie I'm about to write about was released) when we were in Florida, we went to the mall and saw WarGames, a movie I still love (even if, like the hotels we stayed in, it is in reality probably pretty mediocre). Another time – the year before, I think – while we were at the Panama City Beach mall (apparently we went to that mall a lot), we were in the B. Dalton bookstore and while I was browsing in the science fiction section some random guy recommended a Piers Anthony novel to me, which, probably because it had a cool cover, I did buy and read, and Piers Anthony became for a time one of my favorite writers. Strangely enough, I still associate WarGames with a great Florida vacation, but I don't make that association with Piers Anthony. Probably because we actually saw the movie in Florida, but I didn't read the novel (Split Infinity) until we were back home. Also because WarGames is just one movie, but I went on to read something like twenty-five of Piers Anthony's novels.

Dad's brother Tommy (my uncle, who passed away in 2008) and his wife Kathy (my aunt) and their son Ric (my cousin, about the same age as Jeff) went with us most years. We would get adjoining rooms in the hotel and sort of share our rooms (or at least we did this once, one year, if not every year. I remember watching Princess Di get married on the television in Tommy and Kathy's hotel room–at least, I'm pretty sure that happened (Princess Di did get married, that part I am certain of. It's whether I saw the event in a hotel room in Florida that I wouldn't swear to in a court of law). Wikipedia tells me that Princess Di got married on July 29, 1981, so, if I'm remembering correctly, we were in Panama City on vacation then.)

Our approach to travel, which I've since learned is the way many families approached it at the time, was to head out very early – 4:00am, for example – and get there by noon, so we had much of that day in Florida. I can only imagine how tired Dad must have been after that long drive! One year, probably 1982, I got to do some of the driving – we took the Cadillac that year; I remember it well! – since I had my learner's license and needed some practice.

I'm sometimes sad and disappointed that my own children don't have the same Florida vacation experiences I had. I hope that when they grow up, our regular weekend trips to Rock City and our family outings to Stone Mountain or Zoo Atlanta will occupy as treasured a part of their memories of their childhoods as our trips to Florida do in mine.