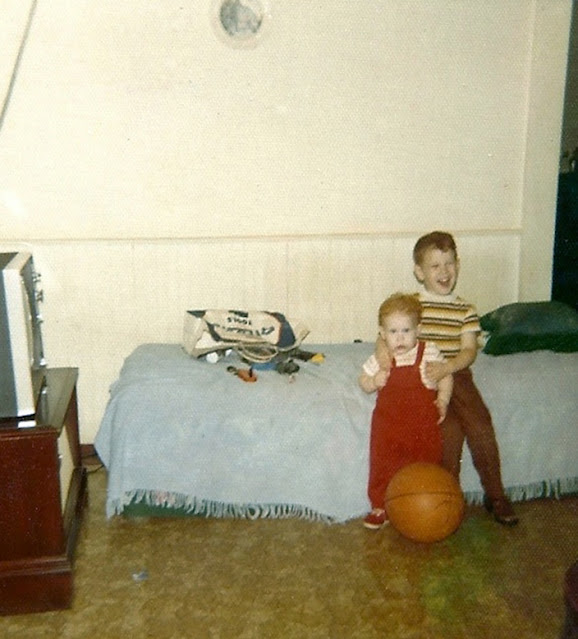 Doing a little math in my head, I arrive at this incredible fact: since Aunt Lois – in whose house this photograph was taken, about fifty years ago – was born in 1918, when this picture was made she was only 53 or 54 years old – a year or two younger than I am right now. I'm older than Aunt Lois!

But of course, I'm not. Aunt Lois – who was in fact my great aunt; she was Dad's aunt, but because he called her Aunt Lois, I called her Aunt Lois – lived to be 85, and when she left us in 2003, more than eighteen years ago, I was only 36; I may be as old now as Aunt Lois was in my earliest memories of her, but I am not really "older than Aunt Lois."

In 1998, they – I'm not completely sure who "they" are in this case; her children and grandchildren, probably – had a birthday celebration for Aunt Lois at her house when she turned 80. It was the last time I ever saw her, and the last time I ever went to that wonderful house in Scottdale when she still lived there. I swear, she looked the same in 1998 as she did in 1972, when she would keep me sometimes while Mom was at work or running errands or doing whatever she did. (Aunt Lois probably did look the same, probably basically was the same, in that she hadn't changed her hairstyle in all those years, and frankly I wouldn't be surprised if that day in 1998 she was wearing a dress that she had back in 1972.) I told Aunt Lois that she looked like she hadn't aged in twenty-five years, and she said to me, "Oh, you're so sweet! If I had a quarter, I'd give it to you."

(There is, actually, one way in which I can I say she did look different: her glasses were noticeably thicker, not surprisingly, and the lenses made her eyes look unnaturally large when I first saw her straight on.)

I don't think the fact that Aunt Lois looked the same to me in 1998 as she did in 1972 says something about her youthful appearance at 80; instead, it says something about how, in the second half of the twentieth century, 50 was old, and someone who was 50 looked old. Aunt Lois at 80 didn't look like a 54-year-old; at 54, she looked like an old lady. By the standards of the time, I suppose she was.

But Aunt Lois isn't even in this picture I've chosen for this musing. I recognize the room as being in her house because of the white paneled walls with the chair rail, and...and just because I know that was Aunt Lois's house. (Uncle Arthur's, too, but it always felt to me more like hers – probably because when I was a kid and spent a day there, Uncle Arthur was at work.) I can't see it well enough to say for sure, but I think that plate on the wall at the top of the frame is an Ingleside Presbyterian Church plate; it seems like exactly the kind of thing this house would have adorning its walls. This is a house I treasure; it was one of the many wonderful places where I spent time when I was a kid – planting acorns in the yard (none of which, as best I can tell, actually grew into trees, but I sure remember planting them), looking at the Sears catalog inside (the Christmas Wish Book, which may have been a year or two out of date when I looked at it at her house, but it showed great toys), making milkshakes in the kitchen with that old manual milkshake-maker she had (it wasn't a blender – you put in some milk, some ice cream, closed it up, and then you shook it until you had a milkshake).

After she and Uncle Arthur were both gone, the family sold the house to someone who fixed it up, turning the attic (I'm told) into a small second floor. I've driven by the house a few times and it looks nice, but I would love to see the inside. I'm sure it's changed, but maybe it would also look mostly the same, just as Aunt Lois did the last time I saw her, very nearly twenty years ago now.