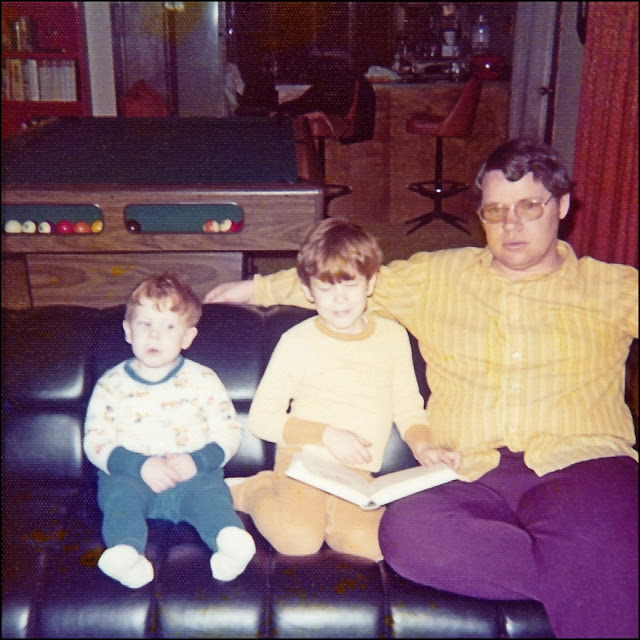 I love looking at this kind of photograph, an "everyday life" picture with no clearly associated event or holiday, just us in our house being us. The house is, of course, our house in Lilburn, and "us" in this case is me, in the middle, Jeff, and Dad. This picture is from February of 1974, a couple of months before I turned seven and right around the time Jeff turned four. Dad was only twenty-nine when this picture was made--still practically a kid himself! (Though near the end of that year he did turn thirty.) When this picture was made I was a little more than half-way through first grade, Miss McDowall's class at Bethesda Elementary. Jeff hadn't started school at all yet.

Behind us is the pool table that we had for the first few years we lived in Lilburn. I vaguely remember playing pool, but my biggest memory involving the pool table is this: Mom and Jan were working on a 10,000 piece jigsaw puzzle, which they kept, for reasons I'm not clear about, on a rolling board under the pool table (or maybe they just put it there temporarily, I don't know), and one day Jeff and Alan got under there and messed it up so much that they (Mom and Jan) just gave up on it. I reminded Mom of this a few years ago, but she didn't remember it. I remember it well. In any case, I don't think we had the pool table past 1978.

On the left side of the frame at the top you can see a red bookcase which Anna and I have now; as I write this, it's in our bedroom on Anna's side with a lot of picture books and middle-grade and YA novels and library books on it. There are some books on the bookcase in this picture, but I can't tell what they are. It looks like there might be a set or a series there; where they cookbooks, perhaps? You can also see--or at least I can see; if you didn't already know what they were, you probably wouldn't recognize them--a set of crossed-swords bookends (or at least you can see one of them), which I think I might have had at some point. I don't know where they are now.

Near the top right corner--but not quite in the corner--is another object you might not recognize if you didn't already know what it is: a roundish red bun warmer, sitting on or beside the stove. I can't distinguish any of the other objects on the stove or the kitchen counters, up there at the top of the frame, though I'm sure there's a blender and a coffee maker there, and, who knows?, maybe a waffle maker. The folding wooden doors at the back of the kitchen are quite visible; behind them was the washing machine and dryer, and also the water heater. On the left side of the kitchen you can see the refrigerator, green, which I'm pretty sure was the same refrigerator we had a decade later when I was in high school.

I wish like anything I knew what book that is open between me and Dad. Jeff and I are both in our pajamas--was this nighttime, just before bed, or was it one morning? I suspect it was night. That yellow shirt Dad is wearing could have been a dress shirt he wore to work that day, or it could have been just what he was wearing on the day this was taken. What was going on that made Jeff look so wary of me and Dad? What was that pattern on Jeff's pajamas? What prompted Mom to take this picture?

Whatever it was, I'm glad she did. I cherish these reminders of how great it was to be a kid in the 1970's.

Our House in Lilburn 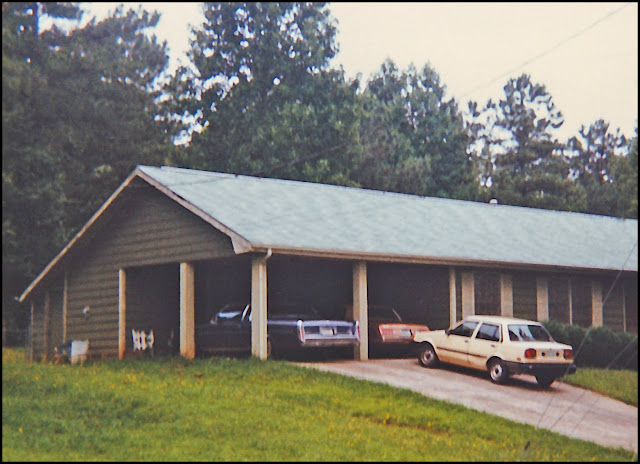 Most of the pictures I choose for these musings have me in them, and often other members of my family as well, but this is just a house. Well, since my family and I may have been at home when this was taken, we might be, in the broadest sense, "in" this picture, but you sure can't see us.

But you can see the house, obviously. This is the house I grew up in, our house on Johns Way in Lilburn. We moved there in 1972, when the house was brand new and I was five, and I lived there until 1991, about a year after I graduated from college. Mom and Dad lived there until 1995, and when they told me they were putting it on the market I was incredulous: Sell my childhood home and live somewhere else?! Now I'm glad they moved — the neighborhood was sort of falling apart, I realize now — but at the time I was dead set against it. They moved anyway, of course.

I can date this picture to 1984 or 1985 based on the cars in the carport. The dark blue car on the left was Dad's Cadillac; it was originally a company car when Dad worked for CompuShop, but he later bought it. The car beside that was our 1978 Chevrolet Monte Carlo, which became my car after...well, I'll get to that in a minute; at this point it was still Mom's car. The white car beside it was a 1984 Toyota Corolla, which I bought—or really, Dad bought for me—after I totaled my beloved 1977 Toyota Corolla in April of 1984. Sometime after this picture was taken, or I think it must have been after this picture was taken, I wrecked that white Corolla on my way to work one morning for Maid in Georgia. It wasn't totaled—that is, the insurance company said it could be fixed, and was not a "total loss," but by that point anyone's confidence in me as a safe driver should have been. Within a few months, I was driving the Monte Carlo. I'm not sure what became of the white Corolla, but Dad eventually got a Toyota Celica. I don't remember what Mom drove then, my first couple of years of college.

The house was then a dark green with light green trim; it's still there, still owned (I'm pretty sure) by the family that bought it in 1995, but it's not green anymore. I drive by it every once in a while—okay, not "every once in a while," but every chance I get, anytime I'm in or anywhere near Lilburn. It was a great house to grow up in, and the neighborhood was great too. It was the kind of neighborhood where the ten-year-old me could take off on his bike after school and be gone for a couple of hours, sometimes playing with the other kids in the neighborhood (Kenny Moss, Steve Brooks, and others whose names I don't now remember), sometimes just riding around the neighborhood (it was a big circle, so I didn't have to go anywhere near a main road) or on the trails behind the neighborhood, through the woods. (Those woods have long since been turned into other subdivisions, but when I was a kid, Gwinnett County wasn't nearly as developed as it is now.) I don't think kids do that anymore—go out riding their bikes or playing in the neighborhood for hours, I mean—but that's more about the fears of parents and society today than about the current desires of kids.

Me, Jeff, and Dad in Granny's Living Room 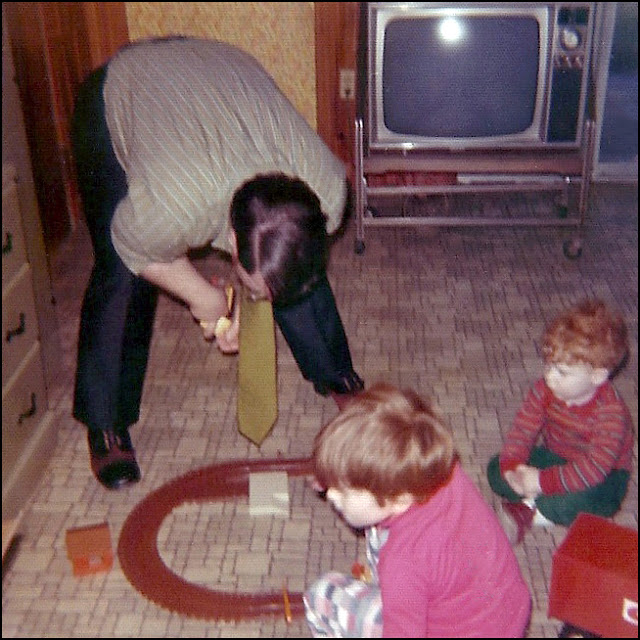 Like so many of the important pictures from my childhood, this was taken at my grandparents' house in Tucker. This was 1973, after (or possibly the day of) Jeff's birthday. I think that Mattel Preschool toy train (the "Motor Putt-Putt Railroad," Google tells me it was called), the brown tracks of which (all you can see of the train set in the picture) Dad is bending over to look at, was another of Jeff's birthday presents that year. Jeff was into trucks and trains when he was a little kid. I definitely remember playing with that train. (I also remember the train in Pa's attic, which I've also written about, but I definitely remember this train, with the plastic brown oval track.)

What I'd forgotten, but which this picture reminds me of, is that house's laundry room door's flowery pattern--was that perhaps contact paper covering the door? I can't quite remember it well enough to say for sure. But man, just seeing that door reminds me of the smell of that laundry room--humidity and clean clothes and the warmth of a gas dryer. (If it wasn't actually a gas dryer in there, don't correct me; just let me go on thinking that.) That laundry room was a veritable treasure trove of stuff--mostly tools and old magazines and newspapers, actually--and I loved going through it in the late seventies. At least I think I did; I would sure love to be able to visit it--as it was then, of course--now.

And that television set, on that rolling cart! As far as I know, that was the same TV on which Granny and I would watch "Wheel of Fortune" together--the Chuck Woolery "Wheel of Fortune"; it was that long ago--and on which I'm pretty sure I saw "Rudolph the Red-Nosed Reindeer" one Christmas in the early or mid seventies.

What you can't see in this picture is my mother standing or sitting behind me, taking the picture, and my grandmother sitting beside her, but I know they were there, and I'm glad my mom took so many pictures like this when we were growing up. They mean a lot to me now.

Jeff and Me in Front of Nanny Risby’s House 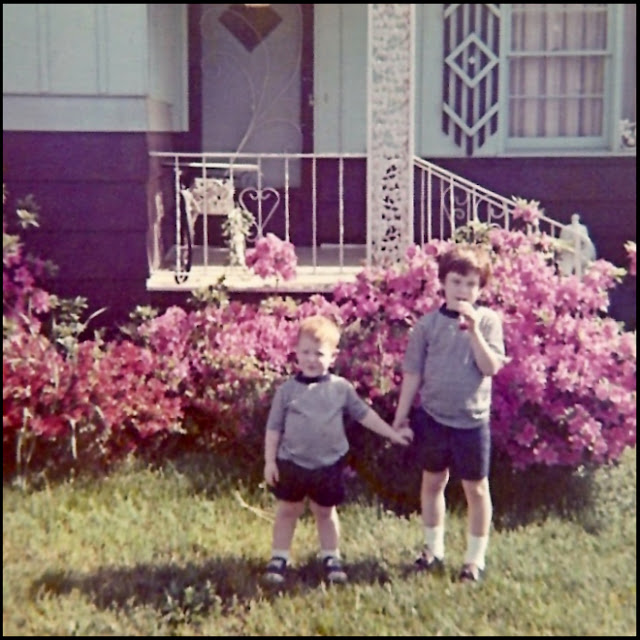 We called my great-grandmother "Nanny Risby," which strikes me now as a funny thing to call someone, but at the time I accepted it as just what we called her, her title. I realized eventually that Risby was her name--Risby Taylor--but I'm not sure why she was specifically "Nanny" Risby. Nanny Risby was my grandmother's mother. My grandfather died in 1978, but Nanny Risby lived until 1979, when I was twelve. It occurs to me now that it was strange that my grandmother lost her husband but her mother was still living.

Nanny Risby is not in this picture, of course, just Jeff and me--and the house. I remember going to that house often when I was young. It was very small by today’s standards, and though I went there many times in the 1970's I'm not sure if I ever saw the bedrooms. I don’t remember the bathroom, either. Here's what I do remember: Nanny Risby always had Nutter Butters on hand, and there was a big cement water fountain out back that she would turn on for us kids. My cousin Sharon told me once (when we were well into our adulthoods) that Nanny Risby was "a mean old woman," and she probably was, but mostly I remember that her mind was going and she forgot things and had stubbornly set but (so I thought) wrong ideas--such as believing that her television could only pick up one station. (I'm pretty sure I could tune it to any of the three that were available then, though I don't remember ever watching TV at her house, except one time we were then when it was time for her "story.") Back then we would have said that she was getting "senile"; maybe she had what we now call Alzheimer's disease, I don’t know; in the seventies I don't think that was something many people had heard of.

The other thing I remember is that Nanny Risby had a boarder, Blanche, who I assumed was somehow related to us. It was only fairly recently that my mother told me that Blanche was just someone who rented a room from Nanny Risby, and wasn't related to us at all.