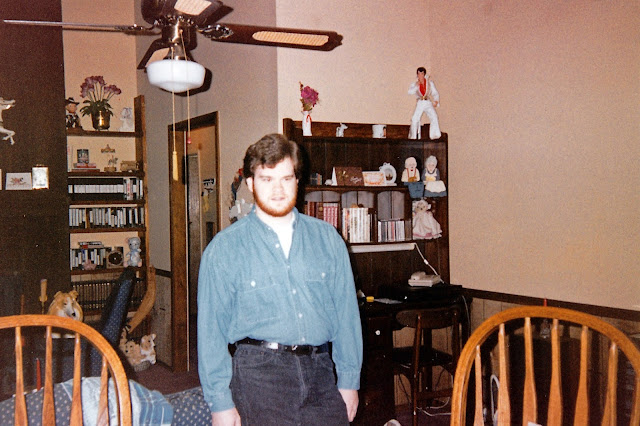 Unlike most of the pictures I pick for these musings, this one is not at least thirty years old. It's not exactly recent, though; I'm just guessing here, but I think this was 1993, so that makes it 28 years old as I write this. (But then, at my age 28 years doesn't seem that long ago, you know?)

I've written this before, but holy crap I used to be skinny! Or at least, back then I weighed probably 75 pounds less than I do now; maybe I wasn't exactly "skinny," but I was closer than I've ever been (as an adult, anyway!). If I tried to put on that shirt today, I doubt I could even get the buttons to meet, much less fasten them.

Speaking of that shirt, I remember buying it, and two or three others just like it but in different colors, at (I think) the Rich's at Perimeter Mall, back when I lived in the townhouse with Scott in Dunwoody. It was more of a sport shirt than a dress shirt, but if I wore it with a tie I could wear it to work (back then, ExecuTrain hadn't yet switched to "business casual," so I had to wear a tie to work every day; once the dress code did become "business casual," I dressed pretty much the same, just without a tie).

I'm not wearing glasses in this picture, which means I had contacts, which apparently I did in the early 1990's. I wore contacts off and on for a period of about 15 years (from 1984 until 1999, a range which seems like it should be more than 15 years to me) (because at my age 15 years doesn't seem...oh, never mind), and apparently this was one of those periods.

That desk on the right side of the frame, the one with Elvis on top of it, is, I'm pretty sure, the desk I used to have in my bedroom. By this point, I had moved out and Mom turned my old bedroom into a sewing room or craft room (or whatever she referred to it as). Mom still has that Elvis figure, and it's on top of a shelving unit in her craft room right now, in fact. I don't know about the Elvis coffee cup, though. Behind me, on the lower shelf on the desk's hutch, most of the way to the left, there's this set of four medical encyclopedias we used to have (which, if they're still in my parents' possession, are probably hopelessly out of date); to the right of those are a few of Mom's old hardback romance/mystery/gothic novels, by people like Phyllis A. Whitney and Rosemary Sutcliff.

On the shelf almost directly below the Elvis coffee cup there's a small framed picture, which you'd never be able to identify from this photograph, and neither would I if not for the fact that I already know what it shows: it's Jeff riding a horse, taken when he took riding lessons a few years earlier, about 1983 I think. I remember that picture well enough that I can tell that's what it is. There's not really anything special about it, but I remember it.

Back on the shelves behind the fireplace are our complete set of then-fifteen-year-old World Book encyclopedias, also probably hopelessly out of date (now for sure, and probably even then). Above that are a bunch of VHS videotapes, including, I'm sure, Jeff's and my complete collection of M*A*S*H episodes (taped off of Channel 2 every afternoon for years), as well as all my Flintstones tapes, and a bunch of stuff we taped off of HBO. At the very top of the shelves, all the way to the left, is a plaster cartoonish cowboy figure, which I think used to be in my room at one point.

Just two or three years after this picture was taken, my parents sold this house and moved to Lawrenceville, so the last time I saw the living room it looked pretty much like this. I doubt it still does--I'm sure it doesn't have an Elvis figure in it, at least not this one, anyway--and I would really love to see what the current owners have done with it in the last couple of decades.