Jeff Getting His Hair Cut at Moody's Barber Shop, June 1971 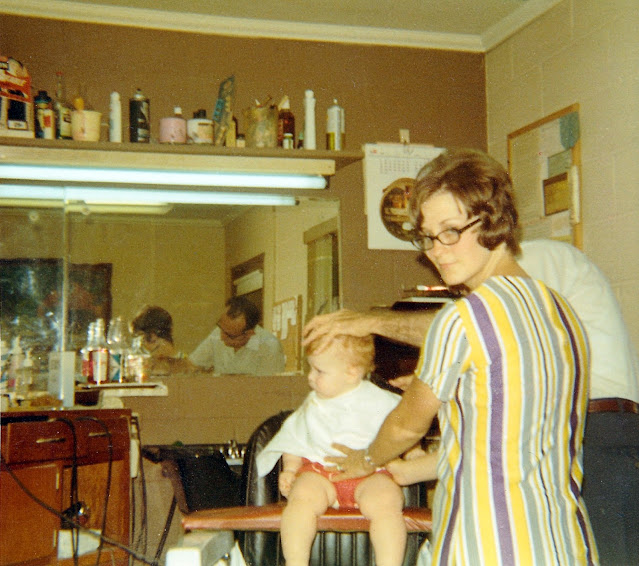 Here we see Mom helping as Jeff gets his hair cut by Chester Moody at Moody's Barber Shop in Scottdale, Georgia, June 1971.

I imagine this was Jeff's first haircut, which is why the moment was preserved in a picture. I'm not sure, however, who actually took this picture; possibly one of Mom's sisters--Jan or Dannelle, most likely--or maybe Dad. I'm sure it wasn't me, though I might have been there that day--but I suspect I was at my grandmother's house or Aunt Lois's--because at four years old, I doubt I would have been trusted to record such an important moment as my brother's first haircut.

This barbershop is also where Mom or Dad took me for the first few years of my life to get my hair cut--including, I'm pretty sure, my first haircut; there's probably a picture of that event too, but I'm not going to go out of my way to find it--and I remember this shop well. It was, or seemed to be, underground, with stairs leading down to the entrance, but I realize now it was built into the side of a hill.

I don't remember Mr. Moody that well, however. I can't picture him (when I try, the face I come up with actually belonged to Milton Vincent), and I can just barely conjure up the feeling of a man's hand clamped to the top of my head as scissors snipped around my ears, and a voice saying, "Hold real still, now" (though I can't actually hear the voice). I must have done a good job of holding still, since I'm pretty sure my ears never got cut. In any case, I know now that, unlike most of the other adults I knew at the time who I just thought were old but were really in their thirties, Mr. Moody really was an old man. He was born in 1912, which means that he was in his late fifties or early sixties back when he used to cut my hair. (That's only a few years older than I am now, but in the early 1970s, sixty was old.)

More remarkably, Mr. Moody was still cutting hair thirty-five years after this picture was taken--and when this picture was taken he had already been a barber for more than twenty years. After picking this picture and these memories for this musing, I did a little research, and I found Chester Moody's obituary online. He lived to be ninety-five years old, and was still cutting hair up until three weeks before his passing in 2007. (I suspect that for the last few years there, he was active as a barber only a few days a month, and probably with only a few very trusting, and probably very near-sighted, long-time customers.)