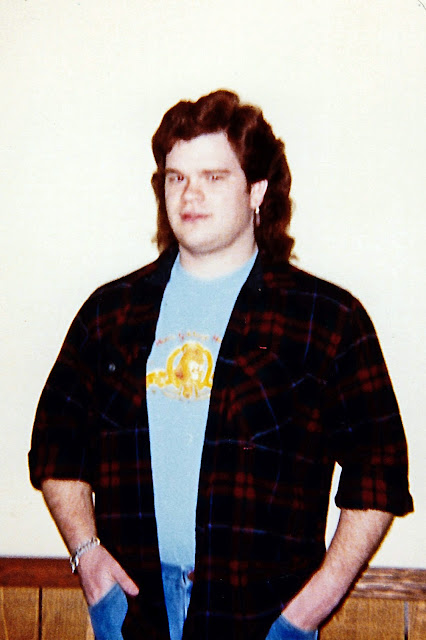 Unlike most of the pictures I choose for these musings, I am (almost, kinda-sorta) an adult in this one. I think I was about 20 when this was taken, probably some time in 1987, maybe 1988. I was out of high school and in college but still living in the house I grew up in in Lilburn, about which I’ve written quite a bit before.

The T-shirt says Metro-Goldwyn-Mayer and has the MGM lion on it. I used to wear that shirt a lot. Dad brought it back for me from a trip to California back when he worked for TBS. I was wearing a plaid flannel shirt over it because...because I always wore plaid flannel shirts over my T-shirts--it was part of the 1980s-long-haired-guy uniform. I was also wearing bracelets and a dangly earring--other parts of the uniform. (And jeans, of course. I always wore jeans back then--I don't think I owned any pants then that weren't jeans. Now I never wear jeans--I don't own a pair of pants that are jeans.)

When this was taken, I think I had already started going to Georgia State University, but it was right after my two years at DeKalb College (as it was known then), which were two great years (or so my selective memory leads me to believe). Though I know this picture was taken a couple of years after the fact, it makes me think of the fall of 1985, my first quarter at DeKalb, and taking Philosophy in the Nursing building--I loved that class, with Dr. Yohan (Shan Yohan; her husband, Walter, also a philosophy professor at DeKalb, had retired a year or two earlier. I know this only because Rod Bennett, whom I met in that class, once told me that somebody told him to be sure to take philosophy with Dr. Yohan, and when he did he was disappointed to find out the professor was the wife and not the husband.)

I was also taking the Mercer continuing-ed creative writing class at night with Jalaine, and finding new writers to admire and emulate (Bobbie Ann Mason stands out as an early favorite, but there was also Raymond Carver and Amy Hempel and others). Back then I used to actually write--I mean, write short stories, poems, parts of novels (these blog entries and musings count, but it just isn't the same thing--I know I'm not creating literature here). I even published a handful of short stories back then, too (but mostly in tiny basement-copy-machine little magazines that nobody's ever heard of, though I racked up quite a few rejection slips from university-sponsored literary magazines).