Two Views of Our Screened-In Back Porch

(A few weeks ago I wrote a post based around just a picture of the house I grew up in in Lilburn. Here's another one, except this is based on a different view of the house, and this time there are two pictures.) 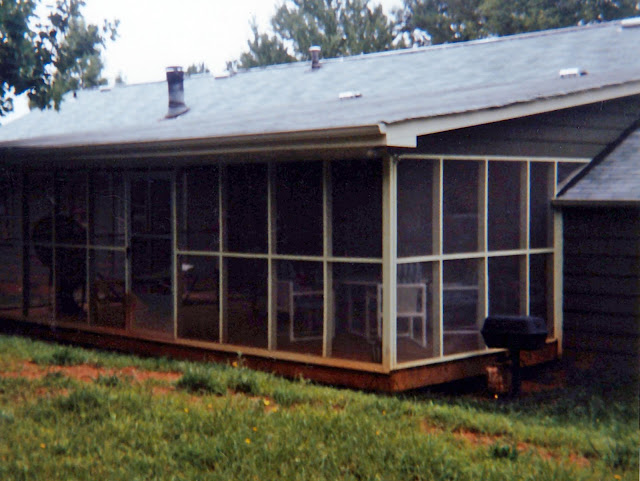 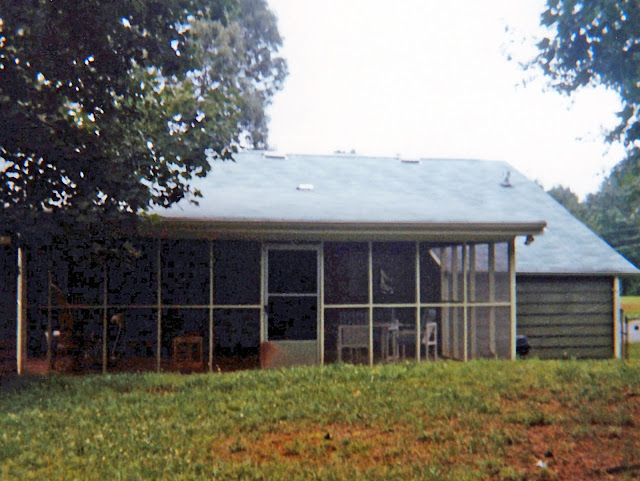 I don't remember exactly when Dad and my uncle Richard (Scott's dad) built this screened-in porch on our house in Lilburn, but I remember the building of it well, even if I'm not sure when it was. But I think it must have been 1981 or 1982 -- I'm almost certain I was at least in middle school at the time, if not already in high school -- which means that for the first eight or nine years we lived there, there was no back porch. In my memory, that house always had a screened-in porch, even though I know that wasn't true. (Memory is often unreliable like that. I think I might have learned that in college; I don't remember.)(Do you see what I did there?)

We spent a lot of time out there, or at least I think we did. (If we didn't, then we should have.) In these pictures you can just make out the white and blue plastic and canvas table and chairs we had on the porch, at which we had summer lunches and the occasional game of Trivial Pursuit. I think there was also some wicker furniture too. And ceiling fans? I think so, but you can't tell in these pictures, and my memory doesn't fill them in. What I wish was true is that I spent a lot of time out there reading, and I know I did some, but I think even after this porch was built I still spent most of my time in my bedroom reading Piers Anthony and Clifford D. Simak novels and playing my guitar.

I do remember this, though: my fourteen-year-old self was in much better shape than I am now, forty years later (not surprisingly), and back then I could do something that I wouldn't even attempt now, which is to climb up on the gate of our chain-link fence, just beside the house (you can just barely see it in one of the pictures above), and pull myself up onto the roof. Some days I would take a book with me and a little plastic jug-shaped container of juice and sit up there on the porch roof -- which was pitched at a more comfortable angle than the rest of the roof-- and read for a while. Whether this is something I just did a couple of times or something I did every day for a whole summer I'm not sure. I outgrew the habit (probably pretty quickly because I imagine it was hot up there, even if it does seem like a cool thing to do).