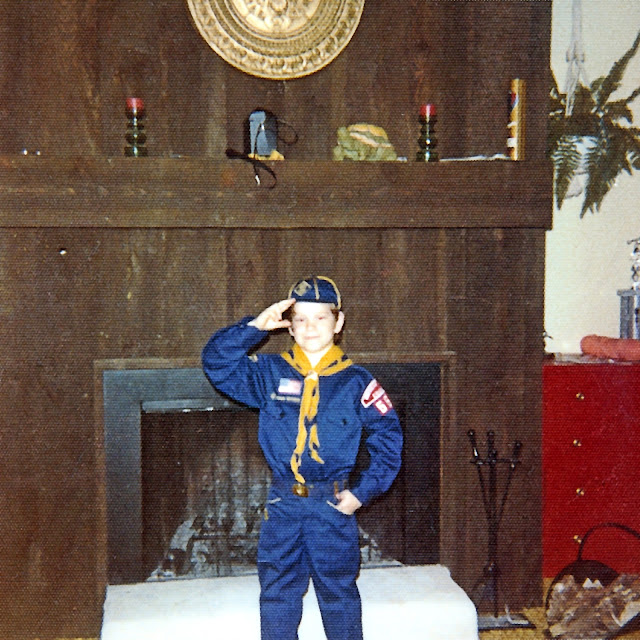 I was a Cub Scout for a whole year—or at least much of a school year, if not actually a whole calendar year. I quit way before I ever had a shot at going from the minor leagues of the Cub Scouts to the big leagues of the Boy Scouts, and I don't regret not participating longer. Every once in a while I have a student who includes in their "About Me" post at the beginning of the semester the fact that they were—or are—an Eagle Scout, and that's great for them, but it doesn't bother me that I never was. I can't tie a Shawshank knot or pitch a tent in fifteen seconds or tell at a glance which mushrooms are edible and which are not, and I'm okay with that. I don't like mushrooms anyway. (Besides, ALL mushrooms are edible. Some of them will, however, kill you.) I do know that, had I stayed in the Cub Scouts, the next level up within the Cub Scouts—not in the Boy Scouts, but the Cub Scouts—was actually called Webelos, which is awfully close to Weebles—"Weebles wobble, but they don't fall down"—and maybe that's part of why I dropped out. I mean, seriously, if you want a nine-year-old kid to continue in your organization, don't threaten him with a dumb-ass title like "Webelo."

Here I am in my uniform, sometime in 1976. There's no date written on the photograph, but I know it was 1976 because the strongest association I have of the Cub Scouts—along with some vague recollections of Den meetings at our Den Leader's house (I'm not sure what should really be capitalized here, so I'm just going to use initial caps on anything that sounds officious or official)—is of marching with my Den in Lilburn's Bicentennial Parade. Although, to be honest, I don't actually "remember" that, I just know it is a fact of my past: I marched in Lilburn's Bicentennial Parade with my Cub Scout Troop. We have a picture or two from that day, but I don't truly have any memories of it.

The only true memory I have of my time in the Cub Scouts is participating in the pinewood derby, a wood-model-car race—or maybe it was the space derby, which is basically the same thing except instead of cars on the ground you race balsa-wood rocket/space ship things suspended on fishing line. I vaguely remember working on my car, or rocket, but what I really remember is going to a church in Lilburn—it's now Calvary Baptist Church, but I'm sure it wasn't called that then—for the actual race. (It's the big church on the right as you're going down Lawrenceville Highway toward Lilburn Square, where the Lilburn-Tucker Cinema used to be.) I don't have any idea how my car, or rocket, did in the race (though if I'd won I'm sure I would remember that), but I do remember that at that time I was reading The Mystery of the Laughing Shadow, which is I think the fourteenth Three Investigators book, and now whenever I drive by that church in Lilburn, which is several times a year, I think about that book, and about going to the church for the pinewood derby (or space derby, whichever). (And about misusing the word "vigil," a word I learned from that Three Investigators book, one day when I was trying to impress Jarrod Parker with my vocabulary in Mrs. Osteen's fourth grade class—but that's a whole 'nother story.)

Maybe the best thing that came out of my brief association with the Cub Scouts was my subscription to Boys’ Life magazine, which I'm pretty sure extended two or three years past my membership in the Cub Scouts. I enjoyed reading Boys’ Life—a magazine which still exists, and which is published by the Boy Scouts of America for its members; it has apparently been renamed Scout Life, a change I don't care for—more than I enjoyed being a Cub Scout. I read the joke page, Think & Grin, of every issue thoroughly, memorizing some of what I considered the best jokes. (I still know some of them today, more than forty years later.) I remember when they started serializing a comic version of Robert A. Heinlein's Between Planets, though I didn't read it. (These days it wouldn’t be described as a "comic version," it would be called a "graphic novel," but thankfully that term hadn't been invented back then.) Nor did my subscription last through the end of that serialization; somewhere in there my subscription to Boys’ Life was replaced with a subscription to Guitar Player magazine, which was more enjoyable, and more appropriate, to the fifteen-year-old me. Now I remember the two magazines with equal fondness. (When I actually read the Heinlein novel a few years later, I thought immediately of Boys’ Life magazine, but that association didn't last long.)

Before I close this musing, I need to say a few things about that living room. This picture is forty-five years old, and I haven't lived in that house for thirty years, and I'd forgotten that the fireplace hearth was just a big old block of concrete. I remember the dark brown wood of the fireplace and mantle, though, and the black metal of the firebox, and those candles and the ceramic turtle up on the mantle. In the middle of the mantle is a black case, which I think was the case for the very camera my mother used to take this picture. On the right side of the frame there's a red chest of drawers, which I remember well, with a bowling trophy one top of it. Not long after this, my uncle Wayne would build some shelves into that space for us, and eventually there would be quite a few bowling trophies on those shelves.

And here's something I remember very well about this scene: there's a knot-hole in the fireplace—in this picture you can see it as a little circle a bit past half-way up the frame, beneath the mantle and pretty close to the left edge of the picture—and when I was a kid I would push things into that hole so they would fall into the hollow space behind the wood. Mostly I put bits of paper back there, candy and gum wrappers and things like that; I had the idea that they might be discovered years later when the house was renovated or demolished. And for all I know, they will be—or perhaps already have been, if the current owners have altered the fireplace. I would love to be able to comb through the debris back there and see if I wrote any notes and dropped them through that little hole. I can easily imagine the ten-year-old me writing a note for posterity and depositing it in that hole. 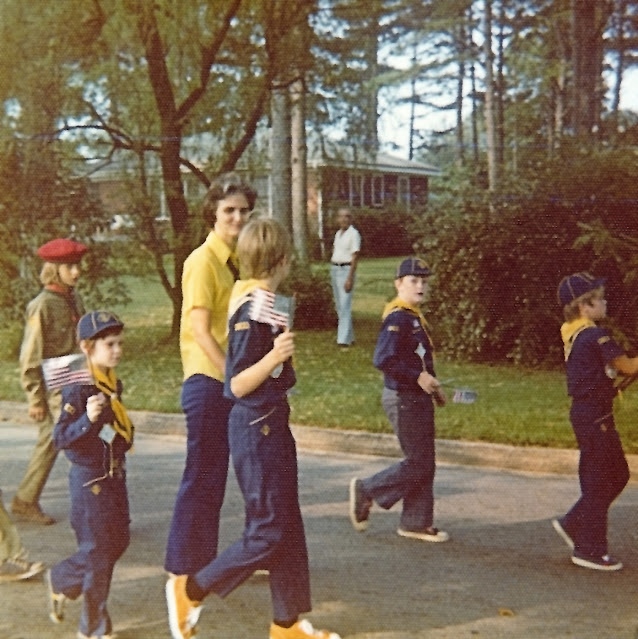 I'm the left-most Cub Scout in the picture, and our Den Leader—I don't remember her name, or anyone else's name—is right beside me. I'm not sure who the green-uniform-and-red-beret-wearing guy behind me is.