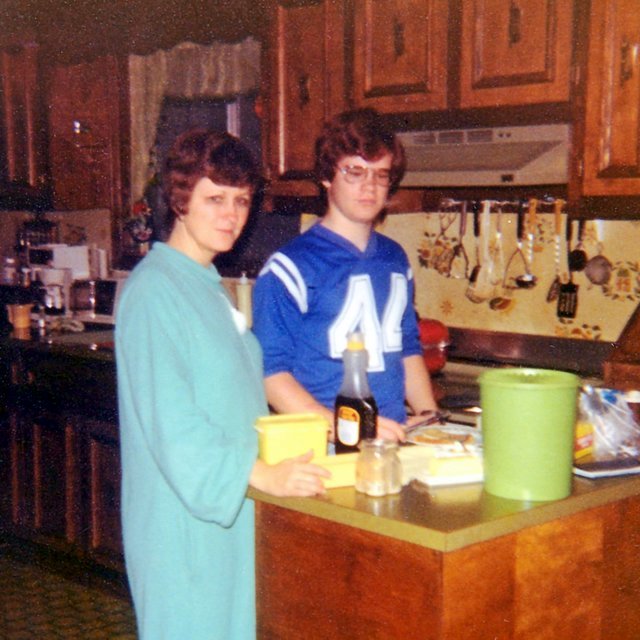 We’re both wearing blue, and neither of us looks all that happy. Not unhappy, just…normal, average, the way most of us look most of the time. We were just living our lives, starting our day (whatever random day that happened to be), getting our breakfast together—in front of me is a plate of pancakes, and also a bottle of syrup, the same kind I use today, I think; in the background, on the left edge of the frame about halfway down, you can see that there’s still some coffee in the coffee pot.

This picture shows an everyday scene of such mundanity that I doubt most people would think it worth pointing a camera at, especially back then, before digital cameras and smartphones with built-in cameras, when film had to be purchased, and then you had to pay to have it developed after you’d used it. I’m not sure why Dad took this picture--I’m pretty sure it was my father who took it; who else could it have been? Maybe it actually was a special day, though I can't find here any clues as to what that might have been (a birthday? Easter? the first or last day of school?). Maybe Dad was testing a new camera, or using up the last exposure on a roll of film so he could take it to be developed. Maybe he did it just to annoy Mom.

Whatever the impetus for this picture’s existence, I’m glad I have it. It offers a glimpse into my youth I treasure. I'm pretty sure that at the moment this picture was taken, Mom and I were mostly taking that moment for granted. I had, I’m quite sure, no idea I would someday look at this scene and be happy to revisit it. I’m sure I just wanted to eat my pancakes. I hope I enjoyed them.

What I hope even more, though, is that it would have occurred to me, at least every once in a while, to be grateful I had a mother who would make me pancakes, and who on other days made French toast, or creamed chipped beef on toast (sometimes without the beef), or bacon and eggs, or any one of a whole host of other breakfasts she regularly made for us. I am grateful now for all of that.

And though I'm sure it would have been surprising news at the time to say that that kitchen would ever be an object of appreciation, all these years later I have a great deal of affection for it--linoleum floor, tacky wallpaper, and all. On the counter, in front of the syrup, is a little container Mom used to screw on to our blender to make...what? I have no idea. And behind me, just at my left elbow, you can see the red bun warmer that we had for years. Above that, just under the vent hood--where some years later a microwave oven would go--hangs an assortment of spatulas and ladles and strainers. And, as I pointed out earlier, on the left edge of the frame you can just make out the coffee maker. Mr. Coffee? Maybe. We had one at one point, but I don't remember what we had then. Proctor Silex? Hamilton Beach? Perhaps. Maybe it doesn't matter.

But in a way, it does matter. These little details, in their very ordinariness, their everydayness, are among the things I love to see when I look back at these old pictures. Most of them are pretty mundane, with nothing special about them, but put together enough ordinary little details and they just might add up to a whole past.

Remember what Emily asks the State Manager near the end of Our Town? "Do any human beings ever realize life while they live it?" The answer, of course, is "No."

Maybe one of the reasons I love looking back on these kinds of pictures is because they help me realize life, even if what the picture shows happened thirty-five years ago. In one of her short stories, Amy Hempel writes something like, "looking back shows us more than looking at." Sometimes looking back is good enough. If you realize life in retrospect, that still counts.