Chris and Jeff Rocking Out in Jeff's Bedroom, Lilburn, GA, 1980 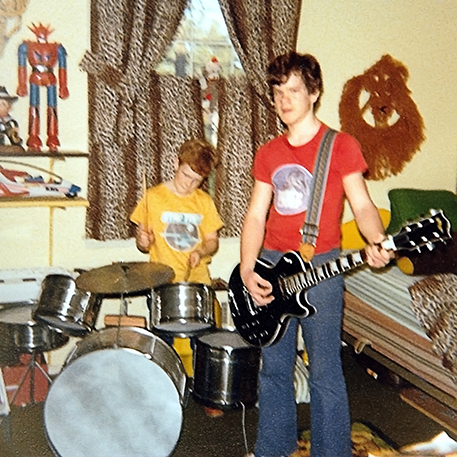 Jeff’s wearing a Star Trek T-shirt and mine says Star Wars, but there was no rivalry between those two science fiction universes back in late 1979 or early 1980 when this picture was taken. One was an old TV show that had been off the air for more than a decade, the other was a fairly recent, wildly popular movie—but just a movie, singular, and not a whole franchise, or, for some people, a way of life. (By the time this picture was taken, Star Trek: The Motion Picture may have been released, but it wasn’t very good so I don’t think it counts. Also, I don’t think The Empire Strikes Back had come out yet, and besides, Star Wars is the only real Star Wars, as far as I’m concerned.)

“Star Trek” and Star Wars aren’t the only science fiction represented in this photograph: on the top left you can see a Shogun Warrior, whose fists (if I remember correctly) could be shot from his arms like missiles at the press of a hidden button, and who probably had other weapons as well. On the shelf directly below that is a space vehicle of some kind from the Micronauts line.

At one point Jeff and I had quite a collection of Shogun Warriors and Micronauts. Among my many wonderful memories of childhood are the times when we could convince my mother to take us to Lionel Playworld, which was on Buford Highway in Doraville (though I may not have known either of those facts at the time), and which was (as far as I was concerned) the greatest toy store in the world. I can’t recall how much was actually bought when we would go; I think we had maybe ten dollars each saved—though in the late 1970s, ten dollars was a lot—and we could buy one or two things. Just being in Lionel Playworld was enough, even if I didn’t get to buy everything that caught my eye. We did eventually amass quite a collection, as I said, but most of the toys we had we got for Christmas or our birthdays.

Of course, most people might not even notice the Shogun Warrior and the Micronaut. The focus of the picture is me and Jeff in all our youthful, untrained musical glory. I got the guitar for Christmas just a few months (or maybe even weeks, or days) before this picture was taken. It was a black Memphis Les Paul copy, which had a mostly hollow body that was badly prone to microphonics. My amp, which isn’t in this picture (or in Jeff’s room at all), was a twenty-watt Crate amp.

This wasn’t originally the guitar I was going to get; Dad had an Explorer copy on layaway at Joe’s Music in Norcross, but I changed my mind at some point and decided I wanted the Les Paul. Though it’s been nearly forty years, I sometimes think about that and wish I’d gotten the Explorer.

The drums may have been more my idea than Jeff’s, I don’t know. I was eager to put together a band, and figured the guy in the bedroom right next to mine was a good candidate for the drums. How interested he really was, apart from a level of enthusiasm than an older brother can sometimes inspire, I don’t know, but he never really learned to play those toy drums. At one point, a year or two later, I somehow managed to get him outfitted with a bass, but we never really coalesced into a band. (Interestingly, it was that instrument, a cheap copy of a Fender Telecaster bass, that my cousin Scott played when he and I were in the band with Roy, so I did, in a manner of speaking, achieve my end.)

It took me a few years, but I finally realized that I don’t actually have any musical talent. Not enough, anyway, to become the working musician I once aspired to be, and definitely not enough to even approach the skill of the guitarists who were (or would become, in the months and years after this picture was taken) my idols: Steve Howe, Steve Morse, and especially Alex Lifeson. Within five or six years of this picture being taken, Jeff would become a much better guitar player than I was.

But this picture doesn’t remind me of lost dreams or a lack of talent—though I will admit that those are things I still occasionally struggle with. This picture reminds me of how great it was to be young and to have hopes and aspirations, and to have a brother you could try to rope into being involved in them, and, perhaps most important of all, how fortunate I was to have a mother who would put up with all the noise coming out of my bedroom (small though it was, that Crate amp I had could really wail), and who could macramé a lion for your brother’s bedroom wall, and take you to Lionel Playworld so you could dream of one day owning the entire collection of both Shogun Warriors and Micronauts.