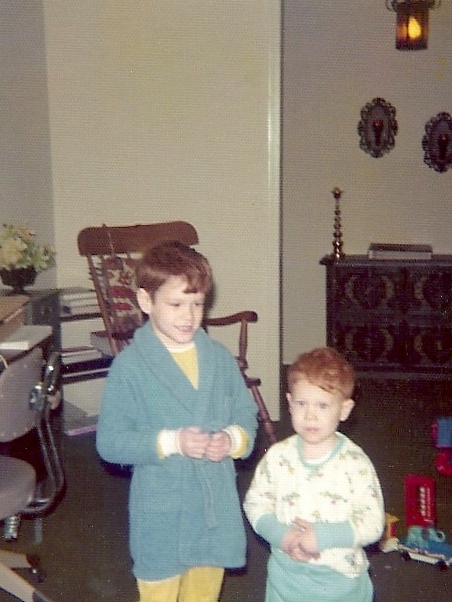 Shown here are me and Jeff, in our Lilburn house's den as I have no memory of it ever being.

This had to be 1973 or 1974, sometime in the first year in which we lived in this house. It was in this room, the den, that every year we put up our tree and had Christmas – though in this picture the room is clearly not decorated for the season; I suspect this picture was made shortly after our first Christmas in this house – maybe even before we'd ever had a Christmas here! In any case, though I do remember lots of Christmases in this room, I don't remember the room being furnished and arranged quite like this.

Some of what you see here I do remember: Behind me and Jeff, largely in shadow, is the house's official entrance – not quite big enough to earn the title "foyer," though maybe that's what it was – where the front door was, though we hardly ever used that door; we mostly came in through the garage (which led into the kitchen). There's an orange light fixture hanging down, and a cabinet against the wall, with a candle holder and a photo album on top of it. We kept our photo albums in this cabinet (except for the album that was on top of it), and I remember looking through those photo albums often through the years. Let me pause here to express my eternal gratitude to Mom for arranging all of our pictures in photo albums – not to mention for making sure those pictures were taken in the first place (almost certainly including this one).

Okay, so that entrance, with the cabinet and light fixture and even those wall sconces, I do remember. But most of the other stuff you can see in this picture I don't remember.

Behind us, nearly in the corner, sits a rocking chair; it looks like a good rocking chair, but I really don't remember having it. Behind that, actually in the corner, stands either a small bookcase or a rolling cart; whatever it was, it appears to have books stacked on it. On the left side of the picture you can see the back of a very dated old metal office chair; Dad obviously had his desk there then, though I mostly remember his desk being along a different wall (and the desk at which I often sat playing Frogger and Space Invaders on the Apple II we had in the late 70s and early 80s was a different desk anyway). To the right of that, near the rocking chair, with a squarish vase of fake flowers atop it, squats a short metal cabinet of sliding drawers that Dad still has in his office at home today (though in a different house, of course).

I don't know if anyone else is remotely interested in these musings or not. I doubt that me describing old photographs of places I remember from my youth, and trying to explain what I see in the photographs, appeals to too many other folks. But it means a lot to me to look back at these old pictures, in this case from almost fifty years ago, especially when the picture shows something I don't remember.

It also gives me a good excuse to point out, as I think I've noted before, that Jeff and I used to be cute little kids! What happened?!