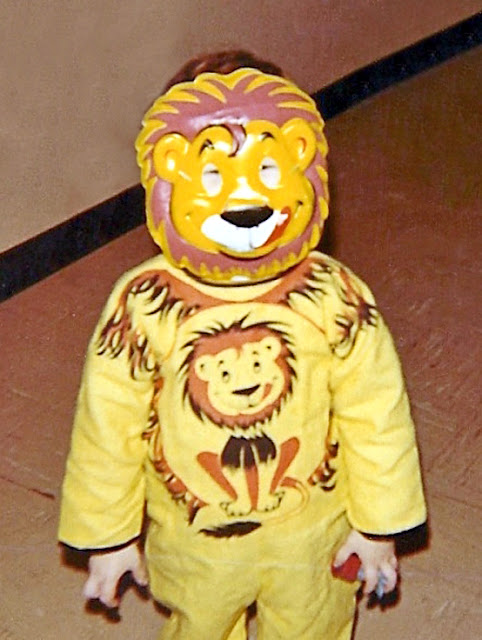 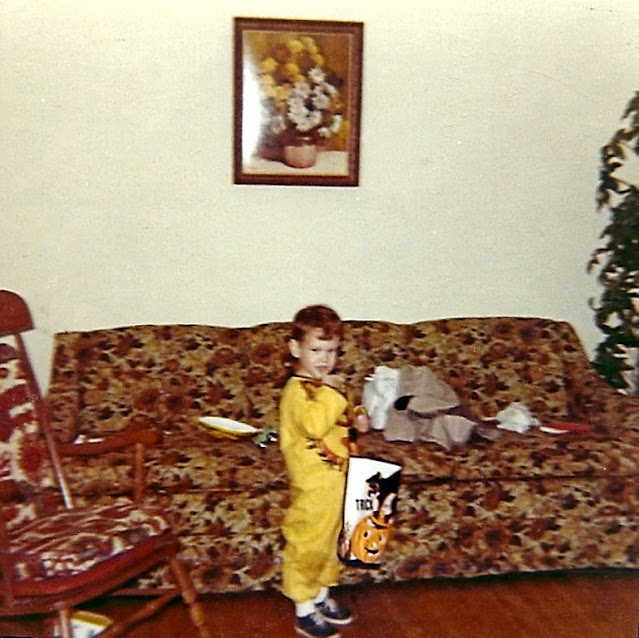 Fifty years ago I was a lion for Halloween.

FIFTY YEARS AGO! That's amazing to me. What's equally amazing is that I remember--I think, anyway--going with my mother to the Woolworth's at North DeKalb Mall and buying this costume. Or do I just remember her bringing it home to me? I'm not sure. I have a very vague memory of the yellow Volkswagen Beetle we had then ("we" I write, as if I sometimes drove it), and bringing in a shopping bag containing a box containing this costume.

The first picture was taken in the basement ("fellowship hall"? I'm not sure what it was actually called.) of the old Ingleside Presbyterian Church in Scottdale. Back in the 1970s, Ingleside used to have Halloween gatherings every year (though I suspect they were on a Friday or Saturday night, not necessarily on the actual date of Halloween); there's a picture I'd love to post but which I can't find, taken at Ingleside the year my brother Jeff dressed up in a fantastic Cookie Monster outfit Mom made for him.

The second picture was taken at our house in Clarkston, the living room of which apparently had a floral motif. I don't know if the Trick or Treat bag I'm holding is in an empty pre-trick-or-treating state or is full of candy. I'm not sure if I actually went trick or treating in our neighborhood or not; I have no memory of it. It's possible that the second picture above was actually taken before the first one.

Another amazing thing is thinking about how different the country, and my world, were when these pictures were taken. The Vietnam War was still going on; Nixon was still in his first term as president; the Watergate scandal was still a couple of years in the future, and the first moon landing was less than a year and a half in the past. Dad still had another week as a twenty-five-year-old, and Mom wouldn't turn twenty-five for another year. All of my grandparents were still alive, and several of my cousins had yet to be born. First grade for me was still nearly three whole years away.